The Future Is Unclear for The ERA

Even though Virginia has become the 38th and final state needed to ratify the Equal Rights Amendment, the ERA’s future is uncertain, in part because of a ratification deadline enacted by Congress decades ago. (Constitutional amendments must be ratified by three-quarters of the states, or 38.) The U.S. archives, which has responsibility for the final adoption of amendments, said it was following advice from the U.S. Department of Justice, which issued an opinion that it was too late for states to ratify because of the congressional deadline. The department said the amendment process must begin anew.

Many legal observers have long expected the issue to make its way to the Supreme Court. Two competing camps have filed lawsuits, setting the clash in motion. The first, the anti-ERA states of Alabama, Louisiana and South Dakota, filed their lawsuit December 16, arguing that the deadline is valid and that the actual number of states ratifying is only 33, because 5 have rescinded their ratifications.

The second, the pro-ERA states of Virginia, Nevada and Illinois, filed their lawsuit January 30, arguing that the ratification deadline, which was first set for 1979 and later extended to 1982, is not binding. These states argue that the U.S. Archivist has a ministerial, non-discretionary duty to publish and certify ratifications sent to him by states. In response to this lawsuit, the U.S. Archivist, David Ferriero, confirmed that he would not act on Virginia’s ratification until he received direction from the Department of Justice or the U.S. courts.

The pro-ERA states, in response to the anti-ERA arguments, say that Article V of the U.S. Constitution gives Congress the power only to propose amendments and to choose the “Mode of Ratification” among two options: (1) state Conventions or (2) state Legislatures. Article V does not give Congress power to impose time limits on when states may consider or ratify amendments. The power to ratify amendments—or not—rests solely with the states. They also argue that the deadline instituted by Congress is not binding because the time limitation was in a resolution preamble, not in the text of the article that was sent to the states for consideration.

Pro-ERA advocates note that the last amendment to be added, in 1992 - the 27th Amendment limiting the ability of members of Congress to raise their own pay - took more than 200 years to be ratified by 38 states.

In the most recent developments, the Trump administration asked a federal court to throw out the lawsuit from the attorneys general of Virginia, Nevada and Illinois that seeks to force the U.S. archivist to carry out his statutory duty of recognizing “the complete and final adoption" of the ERA as the 28th Amendment to the Constitution. Following that, Department of Justice civil division officials filed a motion to dismiss the case -- an expected move. The officials argued that the plaintiffs lack standing because they haven't alleged a "concrete injury" linked to the actions of the U.S. archivist and that the complaint should be dismissed "for failure to state a claim."

They also argue that whether states can validly rescind ratification of an amendment isn't "ripe for review" and that the plaintiff's claims would require the court to "decide issues that are non-justiciable political questions." The same officials in April filed a motion to dismiss another federal lawsuit in Massachusetts, where the group Equal Means Equal has sued to ensure the ERA is adopted.

Two other federal lawsuits have been filed, one supporting and one opposing the ERA.

While the Democratic-led U.S. House of Representatives in February voted to eliminate the ERA deadline, Senate leader Mitch McConnell has given no indication that the GOP-led Senate would take up the House resolution.

A number of parties are preparing amicus curiae (friend of the court) briefs.

In addition to this so-called Three State strategy to reach ratification by adding the three states (which has been successful, with Nevada, Illinois and Virginia), there is another route: starting over with a fresh amendment.

This could be far more time-consuming but some proponents have been working at. New York Rep. Carolyn Maloney has reintroduced the Equal Rights Amendment multiple times.

Supreme Court Justice Ruth Bader Ginsburg said she thinks that Congress should junk the current amendment and start over from scratch.

"I would like to see a new beginning," Ginsburg told an audience celebrating the 100 year anniversary of the 19th Amendment. In particular, Ginsburg expressed concern about the validity of the ERA's post-deadline ratification process.

Ginsburg pointed out that "if you count a latecomer," like Virginia or Illinois, "how can you disregard states that say, 'We've changed our minds?'

Sources for this article: https://www.lwv.org/blog/know-equal-rights-amendment-lawsuits

Equality for all is the right thing to do

Equality of rights, regardless of sex, is a fundamental human right that belongs in the Constitution. In the words of Justice Sandra Day O’Connor,

“The ERA recognizes the fundamental dignity and individuality of each human being and rests on the basic principle that sex should not be a factor in determining the legal rights of men or women.”

RICHMOND, VA—Today’s formal ratification of the Equal Rights Amendment (ERA) in Virginia is a cause for celebration. This day has been a long, long time coming, and credit for this historic victory is due to the new leadership of the Virginia legislature—and the groundswell of feminist activists and voters who put them there.

After successfully passing the state House and Senate on Jan. 15th, today’s crossover vote makes Virginia officially the 38th state needed to ratify the ERA—passing the three-fourths of the states threshold the U.S. Constitution requires for final adoption of an amendment. However, obstacles to certification remain, including an artificial timeline imposed in the preamble to the ERA in 1972. Now Majority Leader Mitch McConnell won’t let the Senate vote on a bill to remove that timeline, S.J.Res.6, even though it has two Republican co-sponsors, Lisa Murkowski and Susan Collins. 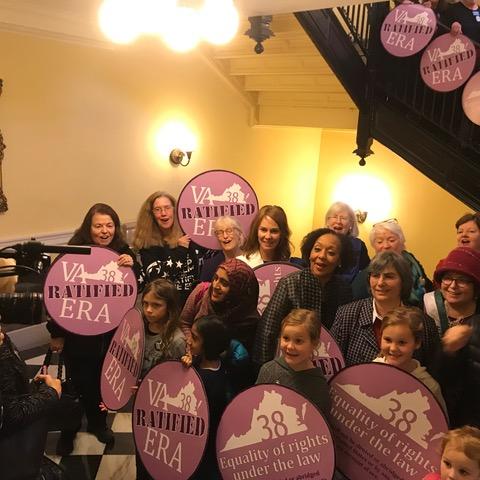 While the timeline removal bill is not necessary—legal analysts have asserted that Article V of the Constitution does not permit the imposition of deadlines on the ratification process—it would provide extra insurance as the ERA certification process goes forward. NOW calls on Congress to act on S.J.Res.6 and correct the Constitution’s most glaring omission. It is simply never too late for equality.

A democracy that fails to include women in its founding document is a failed democracy. But today, Virginia women have shown how to rise up and put equality, reproductive rights and women’s justice at the front of the political agenda.

The Equal Rights Amendment enjoys enduring, bipartisan support. U.S. history shows that Americans have consistently valued equality, but not been inclusive in the definition of who was entitled to equal rights. Republican national platforms proudly supported the ERA from 1940 until 1980. Today, 81% of Virginians support ERA ratification, including 77% in Republican House districts and 86% in Democratic House districts. Over 30 city councils and county boards of supervisors, including some in liberal areas and some in conservative areas, have passed resolutions supporting Virginia’s ratification of the ERA.

Women’s rights are currently subject to political winds: the laws shielding women from discrimination in the absence of Constitutional guarantees can be changed or repealed and court decisions retreated from or overruled.

Advocating for the ERA 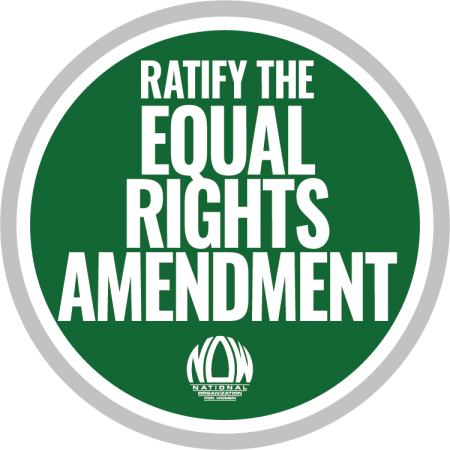 Ratifying the ERA has been a priority for NOW. Women are still not guaranteed equal rights under the U.S. Constitution. NOW has made ratifying the ERA a top priority because equality in pay, job opportunities, political structure, health care, including reproductive health care, and education will remain elusive without a guarantee in the U.S. Constitution. An ERA will also make it significantly more difficult to roll back progress on women’s equality: an acute concern in our current political climate. NOW supports an intersectional interpretation of the ERA that uplifts the needs of all women including immigrant women, low-income women, women of color, women with disabilities, and the LGBTQIA+ community.